During the webinar "Different Aerial Application Methods in Uruguay", held on August 13, our partner Alan Poulsen presented some results of the use of the Zanoni-Spectrum electrostatic system. The event, which was organized by Eng. Orlando Ramos, was attended by several experts in aerial application from South America.

Alan Poulsen has been an agricultural pilot since 1979 and an entrepreneur in the industry since 1992, when he founded Taim Aero Agrícola. In 2001, Alan introduced the use of electrostatic technology in South America, through a partnership with Spectrum (from the USA), becoming a pioneer in the subject in the region. Due to his long-standing friendship with Zanoni, Alan forged a partnership between us and the American company, so that we could start manufacturing the equipment here in Brazil. During the presentation "Aerial application with electrostatics: new developments in Brazil", Alan better detailed the functioning of the system and the results of some scientific researches that we have been carrying out.

The electrostatic system works with an hollow cone spray tip and an electrode that provides a charge of up to 16,000 volts. For each type of application/product, the voltage is controlled to ensure an amperage between 350 and 400 milliamps:

When passing through the electrode, the sprayed droplets are electrostatically charged. This charge ensures greater uniformity in the size of the droplets: during application, the droplets repel each other and do not clash. When impacting plants, the same happens. Both processes ensure that larger droplets are not formed: 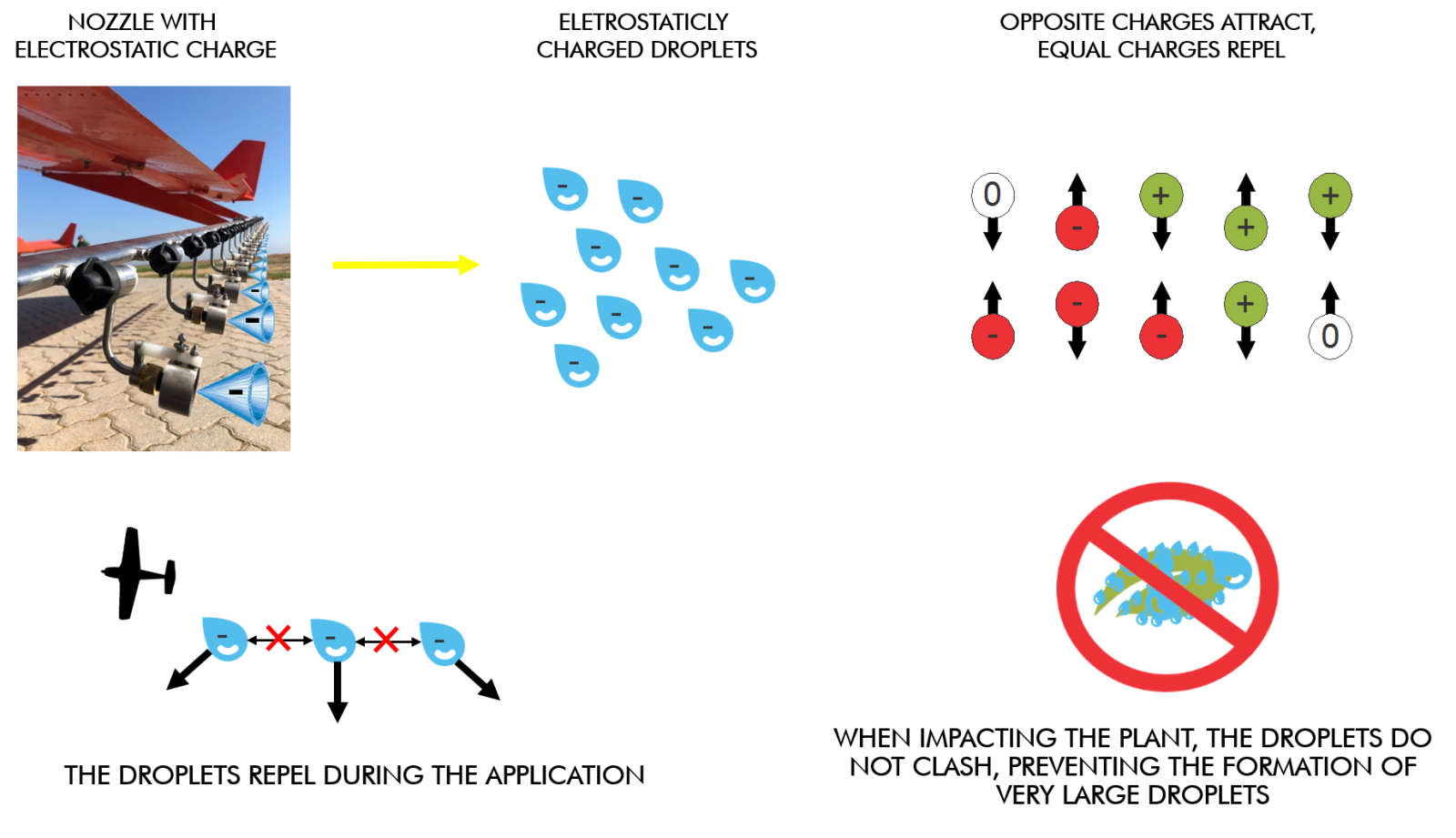 In addition, the electrostatic charge ensures better deposition and better coverage in the plant, reaching parts of the target that are not normally reached by conventional applications:

During the presentation, Alan highlighted one of the main myths of electrostatic application: the non-existence of drift. The pilot emphasized that the technology only contributes to reducing risks, but that it is not a magic solution (as many people believe). All good aerial application practices are still required, such as respecting weather conditions and proper maintenance of the system, which requires some special care for its proper functioning. What electrostatic technology offers is better application efficiency, with higher product concentration on the target.

Alan also presented the results of some research that he has been carrying out with the new electrostatic system.

One of them was carried out in 2016. A group of agronomic engineers from the Federal University of Santa Maria (UFSM), led by professor Tellechea Martini, conducted a work at Taim, in Pelotas. The group compared an electrostatic application with 5L/Ha (~0,5 GPA) and conventional applications with 15L/Ha (~1,5 GPA) and 20L/Ha (2 GPA), all with a load composed of azoxystrobin fungicide + paraffinic mineral oil. The concentration of the product at various points was evaluated, from 50 meters before the swath to 300 meters after the swath (in the wind direction). The results indicated: (1) a higher concentration of the product in the swath and (2) a lower drift potential.

The best results were obtained with both negative charges, offering a VMD of 159.40 µm, a relative span of 0.98 (great droplet size uniformity) and a density of 101.33 N/cm², offering superior quality results to conventional application. 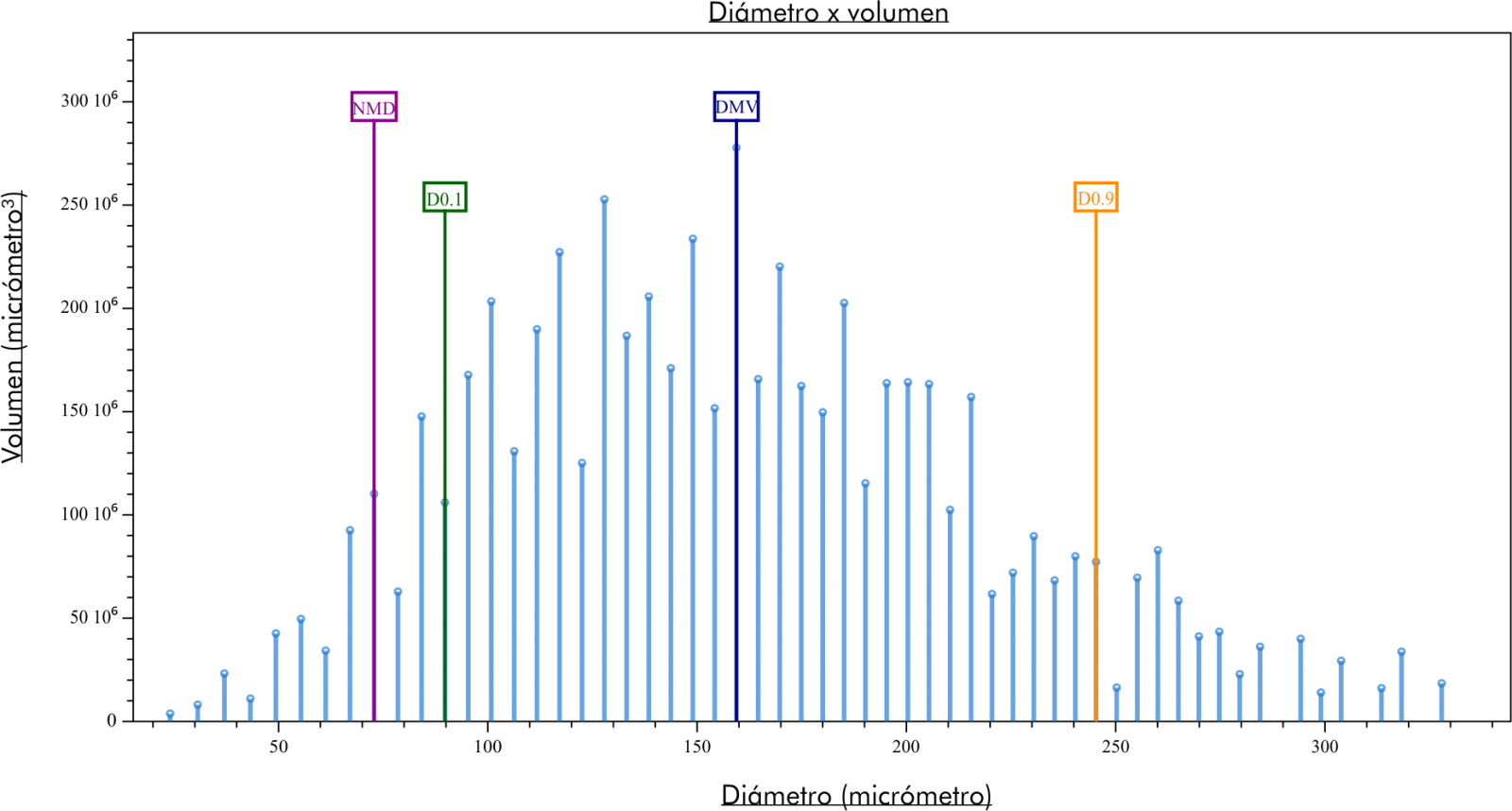 In addition to research, Alan highlighted his personal experience with the use of the technology. The pilot highlighted that it obtained better results in different types of crops (including rice and soybeans in Rio Grande do Sul, cotton in Mato Grosso and avocado in Chile), with different types of application (fungicide, insecticide, foliar fertilizer and herbicide). In addition to greater agronomic efficiency and the ability to reduce the use of phytosanitary products to achieve the same results, he pointed out that he had operational gains due to less water use and the possibility of making a larger area in a single flight.

Finally, Alan ended the presentation by mentioning some new projects underway by the Zanoni-Spectrum-Taim partnership. The system will soon be evaluated in a laboratory, for analysis of different application parameters and for certification with government authorities. In addition, some new types of nozzles are already under development to meet some special demands in Brazil.

Why stainless steel in agriculture?